This was one of the most unusual theatre experiences I have had in some time.  The mother of playwright Lucas Hnath (“The Doll’s House, Pt. 2”) was kidnapped and held by a mentally ill Aryan Brotherhood ex-convict in 1997.  In 2015, Hnath asked a friend, artistic director of The Civilians theatre company, Steve Cosson, to interview his mother and record her as she described her five months under the control of her captor.  This one-person play has actress Deirdre O’Connell lip-syncing the recording of the playwright’s mother telling her story.  Ms. O’Connell’s performance is truly amazing.

For me, it presented a new dimension to acting.  Usually an actor’s voice is an essential part of making an audience believe what it is seeing.  As a college director with inexperienced actors, I asked my performers to match their physicality to their voice — feel and show what you are saying.  For Ms. O’Connell, she not only had to match the physical mouth gestures to the recorded voice of the mother of the playwright (which she does flawlessly), she had to create this other person’s physicality and, as good actors must, communicate an understandable interpretation of the character’s words and thoughts. The way Dana H said her lines had to drive how Ms. O’Connell acted those lines.

“Dana H” really is not a play.  It’s a reenactment of the retelling of a story that is fascinating — a Christian chaplain attempts to save a suicidal criminal and becomes his prisoner.  He drags her all over the southern states and seems to have an immunity to law-enforcement intervention.  The story might be unbelievable were it not for the fact that we are hearing the voice of the actual victim.  And Ms. O’Connell’s portrayal is absolutely believable and insightful. 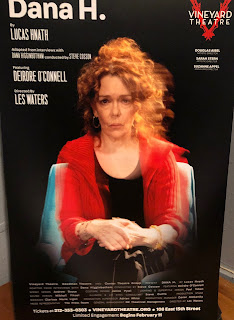 at February 23, 2020 No comments:
Email ThisBlogThis!Share to TwitterShare to FacebookShare to Pinterest

West Side Story by Leonard Bernstein, Stephen Sondheim, and Arthur Laurents
The Broadway Theatre at 52nd and Broadway

OK, I’ll start with the inevitable question: Is it worth seeing?  My answer is a qualified Yes!
I need to start by admitting that I am a bit of an Ivo van Hove fan, the director of this Broadway production -- a rethinking of one of the masterpieces of musical theatre.  I have seen four of his works – each a reexamination of a classic – and, in each case, I found his work fascinating (I must qualify my enthusiasm by admitting that I did not see his much-rebuked Broadway production of Arthur Miller’s “The Crucible”).

I went into the Broadway Theatre with some trepidation.  The press and commentaries made it clear that Mr. van Hove’s production would not hold to the Jerome Robbins’ original choreography and style.  The original “West Side Story” was the culmination of the integration of dance, music, and story – an achievement that completed a revolution in American musical theatre that Agnes de Mille started in “Oklahoma!” and “Carousel.”  The elements in Robbins’ original version were so completely unified that it was almost impossible to rethink his approach to the Bernstein, Sondheim, Laurents’ and Robbin’s creation.  I know this to be true.  I tried in a college production I directed.  So, while I found major weaknesses in the current production, it was still fascinating and emotionally satisfying.

Let’s start with one of the flaws.  The choreography by Van Hove’s Amsterdam partner, Anne Teresa de Keermaeker, is very disappointing.  It appears that Ms. Keersmaeker has tried to restrict the dancing to the type of movement these characters would actually reveal.  So, the music and dance that was written to tell a story becomes an unimaginative exaggeration of contemporary street movement.  Adapting a classic needs to be a rethinking of the original, not an abandonment of its core.

That said, Mr. van Hove has substituted one of his favorite techniques to explain the meaning missing in the dance – video projections.  During the dances, we see the clues to the meaning of the music projected on a screen that is the full size of stage in the rear.  This does distract from the weaknesses of the choreography, but it also increases the awareness of the less-than telling movement on the stage.

If you saw van Hove’s extraordinary use of live action video in “Network,” you know that he can make mixed media work.  The only two realistic sets are Doc’s bodega and the clothing shop where Maria and Anita work.  They are both three-walled box sets that open up at the rear of the stage while the action of the scene is projected on the full-stage screen, making the viewer feel almost like watching a TV movie.  At times, the actors are found in the theatre’s backstage rooms and stairs that visually match the setting of the scene.  This technique is frequently quite effective, giving the extreme emotions an appropriate size and forcing the audience to pay closer attention to the content of the scenes.

However, at other times, the video is distracting.  There are several scenes, particularly in first part of the show, set on the streets of New York.  While the characters playing the scene downstage are not moving, for some strange reason, the projected view of the street that dominates the picture at the back of the stage is moving.  One of the first rules of directing is that the viewer’s eye will always go toward movement. So, rather than becoming involved in the intimacy of characters’ interactions downstage, we are forcibly attracted to the moving projection upstage.  The totally pathetic choreography of “America” is camouflaged by pictures of the real contemporary Puerto Rico – its poverty and its vulnerability to natural disasters – but Mr. van Hove is not content to remind us of our current government’s disassociation with its colony; he mixes in shots of the controversial wall at the Mexican border.  Huh? The only wall blocking Puerto Rico is an ocean.

This production is played without an intermission and that decision certainly makes the tragic ending all the more powerful.  But it also means that Mr. van Hove has to modify the text and music to make the show short enough for an audience to comfortably tolerate its length (one hour and forty minutes).  “I Feel Pretty” has been entirely cut and many of the dances have been edited.  Given Sondheim’s own disowning of some his work on WSS – as he said in a 2010 interview, "It embarrasses me," he said. "It's very hard for me to listen to some of those songs." “I Feel Pretty” is like something his early supporter, Oscar Hammerstein, might have written and it is unquestionably unSondheimian.  However, shortening of the dances is an unexpected relief, given the state of the choreography. 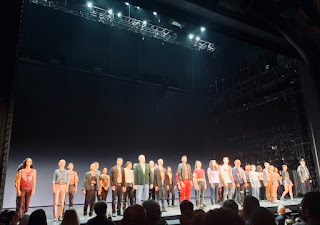 The performances are pretty good although all of the voices are comparatively small, even with the help of good sound engineering.  This is probably intentional.  Mr. van Hove wants a truthful, contemporary feel – belting a song is unrealistic.  This naturalistic vocalization is frequently effective, but there are dramatic moments that lose their power even with artificial amplification.  Isaac Powell is an appropriate Tony, handsome and looks naïve.  His voice is pleasant but too small for the dramatic musical conclusions.  Shereen Pimentel is a totally believable Maria and she has the strongest vocal cords.  Anita is no longer the swaggy sarcastic tough-girl of the past.  Yesenia Ayala plays her convincingly as a strong and independent realist.

There is a large orchestra by today’s standards under the wise direction of Alexander Gemignani.  One of the most interesting adaptations in the show is the transformation of “Gee, Officer Krupke” into a serious commentary on the psychological damage the characters’ environment has unleashed upon these men.  In the original, this song was the required comic relief in the second act.  In van Hove’s version, there is no relief and that is one of the production’s true accomplishments.

The Sharks all look Latino; the Jets are mixed Whites and Blacks – an interesting portrait of contemporary gangs.  Unfortunately, Ms. Keersmaeker does not reflect those differences in her choreography, something Jerome Robbins made into a defining and truthful element in his dances.  It’s tough to turn current Broadway singers into threatening gang members, but the makeup and costume designers have allowed us to accept their menacing look. And Mr. van Hove has underlined the visual updating of the text with a gay man working in, and accepted at, the Puerto Rican dress shop.

Even with these reservations, I recommend this production.  It’s absolutely more interesting and moving than the lame production by author Arthur Laurents several seasons ago. Mr. van Hove’s focus on the story and its amplification in projections draws the audience into the terrible actions set against a story of unconditional love.  And that is what the other collaborator, William Shakespeare, had in mind.

Reviews of shows are scored A to F. A+ is the highest rating; F is the lowest rating.